I have made this brussels sprouts recipe five times (FIVE TIMES) in the past few weeks, each time not getting a photo because they were gobbled up too quickly. By me.

And also, it’s not easy getting an appetizing picture of something that’s charred and in that particular shade of green. But they are so good.  Like candy.

When I was growing up, we never had brussels sprouts except at my great aunt Lida’s house. And they were everything that you’d expect in a detestable vegetable – soggy, bitter, and putrid green.  I was a kid who’d eat ANYTHING, and I didn’t like these. This recipe is the anthesis to those.  If you, too, grew up thinking sprouts were disgusting, please try them this way and reconsider.

How to Roast Brussel Sprouts with Bacon

Here are 3 important notes on how to roast brussels sprouts with bacon in the oven:

To make these heavenly, sweet, sticky brussels sprouts, I pull off as many of the outer leaves as possible and roast them alongside the little sprout hearts.

The leaves char up much crispier that way, and it helps prevent the sprouts from coming out undercooked or soggy in the middle.

Now, here’s the thing, it really is imperative that these little love-bombs roast in a single layer, or they’ll just steam which creates ‘soggy’ brussels sprouts – instead of baking to crispy perfection.

Twice, I made them on a single large baking sheet, and they’re just not as good. Even if they obviously *fit*, you need the space between sprouts for hot air to circulate. It really is best to use two pans.

The bacon is partially cooked before it hits the oven, where it crisps up fully with a drizzle of maple syrup to make it completely and utterly salty-sweet addictive.

Can Brussels Sprouts be Roasted in Advance?

These sprouts are excellent roasted a day in advance and just reheated in a small casserole dish the next day (if you can refrain from eating them all).

Just pop them in the oven alongside whatever else you’ve got cooking, at whatever temperature it’s cooking at (I mean, not on broil or anything), until they’re heated through.

Check frequently and give them a stir every now and then. 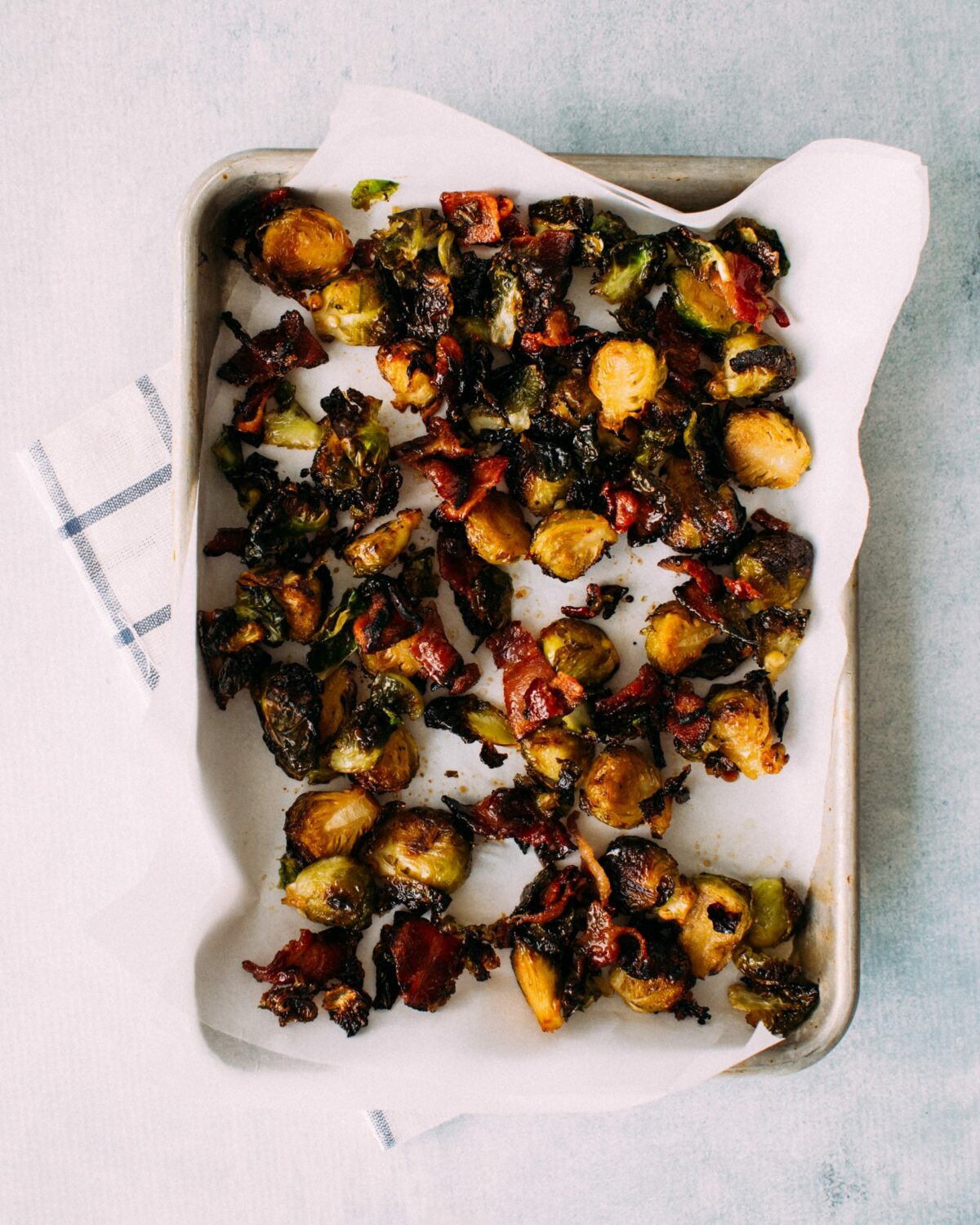 The crispiest candied Brussels Sprouts with bacon and maple syrup

Turkey Dinner: A No-Stress Schedule from Shopping to Make-Ahead Cooking

These were the BEST part of our Thanksgiving dinner! My adult son asked me to make another batch for him to take home! Move over pie, we are eating brussel sprouts! Try them with about a 1/2 cup of craisins and 1 cup rough chopped walnuts! Delicious!

This recipe is a keeper! They came out beautiful and delicious! After the first 8 min. of cooking, I just kept checking until I got the desired char. Since everyone’s oven is different, it may take longer to crisp and char–just be patient and check often.

They’re so delicious, aren’t they, Lisa? Glad you enjoyed the recipe. Thanks for the review!

You just have a cheap air fryer. Stop it. 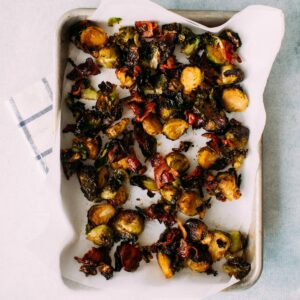 Turkey Dinner: A No-Stress Schedule from Shopping to Make-Ahead Cooking