Since I’ve been pregnant, I’ve been really only craving savoury foods in the morning.

In fact, anything sticky, cake-y or doused in maple syrup before noon makes me want to (or actually) barf my guts out. I was hoping this would pass after the first trimester, but alas, here I am approaching my 19th week and it hasn’t changed.

There are wives’ tales that say if you crave savoury, it’s a boy, if you crave sweet, it’s a girl… do you believe any of these pregnancy stories??

I’ve been really craving leafy greens, too, which is how I wound up making this swiss chard scramble several times this week. It’s also a great way to get greens into my little guy – I just make sure to chop them super-fine so that he can manage them (leaves tend to get stuck in their throats).

The onions add a layer of savoury flavour, and I really like some punchy chile flakes in the morning.

The method I use for scrambled eggs might be different from what you’re used to – I reserve the milk until the very end, rather than whisking it into the raw eggs. Splashed over the nearly-cooked scramble, it adds moisture and sheen, while allowing the eggs to hold their shape a bit more (I prefer large pieces to tiny curds). I believe it was Julia Child who taught me this trick, but it was so long ago I don’t remember for sure.

Since this sweet-aversion started, we’ve been having a lot of eggs for breakfast. I think next week I’ll start making some South-Indian savoury breakfasts – like sambhar and idli – which are so delicious, but maybe a little far from the reach of a North American home cook (requiring special spice mixes and cooking tools) – but would you still be interested to see??

Thanks so much for sharing this recipe – we gave it a go when we had chard to use up and it was delicious. Will definitely repeat! We had it on sourdough bread with our daughter’s leftover baked beans on the side, ha! But it was so quick and easy.

That looks a delicious, well-rounded meal. Thanks for the review, Faye! 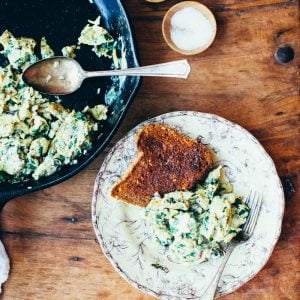