Yesterday was Theo’s 2nd birthday! I can’t believe another year has passed. The first year crawled by, but the second just flew. We didn’t have a big event this time, just a little picnic on the grass by the beach. We tied a balloon to Oliver’s collar and called it a party.

(It was actually pretty funny, because he’d disappear out of sight to take a dip in the ocean, and reappear minutes later with other dogs chasing him trying to catch the balloon. We only prayed he wouldn’t try to out-swim the balloon as it floated behind him… ha!)

I made a chocolate cake, but you don’t need to see that again. I still wanted to share a cake recipe to celebrate, so made another one – this Strawberry Rhubarb Cake.

I am so fully obsessed with rhubarb. I love tangy desserts. But it might also be because it is the first “fruit” (technically a veg) to appear at the market in the spring, signalling the start of a glorious pie-filled summer.

I paid through the nose for it at the first farmer’s market of the year, but it has since surfaced at the regular markets and grocery stores. We’ve been eating it a lot.

Growing up, my mom would simmer down the ruby stalks to a smooth sauce, which we’d pile on buttered whole wheat toast. I treat it the same way now, but prefer to spoon it onto plain yogurt… or ice cream.

This tender yogurt cake is laden with juicy strawberries and rhubarb – the batter really just holds it all together. A buttery brown sugar streusel is marbled over top, creating rustic-looking caramel-ly streaks that sink into the surface.

It’s delicious warm from the oven with ice cream, but great at room temperature, too. It’s very moist and stays that way for a few days. What? Someone eats it for breakfast?! Not me… *shifty eyes* 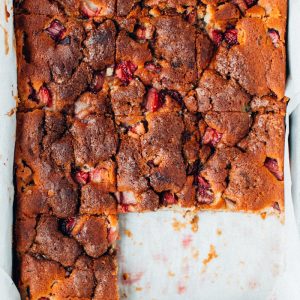