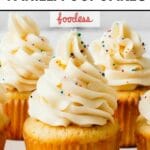 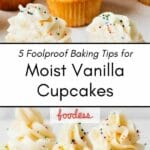 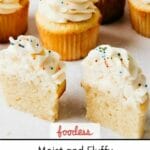 Vanilla cupcakes are notoriously difficult to make really well. You want fluffy, tender, moist, light-textured cupcakes but you often get some combination of heavy, dry and/or coarse-crumbed.

You see, vanilla cupcakes have nothing to hide behind. Their fluffy texture and soft crumb are the epitome of baking as a science. Precise measurement is non-negotiable. Specific ingredients and their temperatures matter. Technique and timing are of utmost importance. But GET EXCITED. I’ve spent months (years?) putting together a no-fail recipe and guide so you can have the most foolproof and best vanilla cupcake recipe experience ever. It’s easy.

The 5 Science-based KEYS to perfect moist and fluffy vanilla cupcakes:

1.Precise measuring. Cake flour is silky-fine in texture, which means it compacts more in a bag and measuring cup than all-purpose flour. For this reason, super-precise measurement by volume is almost impossible. I strongly recommend weighing it. A cup measured by me does not weigh the same as a cup scooped by you, and the extra 1/2 oz of flour can turn a tender cupcake dry. You don’t need expensive equipment. A $15 scale is just fine.

3. Reverse creaming (see what this means below). This technique is an insurance policy against over-mixing (which is a primary culprit in producing tough cupcakes). Starting with this method yields the most absolutely melt-in-your-mouth, velvety tender crumb I’ve ever experienced.

4. Beating egg whites first. Any recipe that asks for separately beaten whites is annoying, I get it. PLEASE bear with me. Beating the whites to peaks and folding them into the finished batter is the SECRET to making these moist and tender cupcakes ALSO light and fluffy cupcakes.

5. Minimize the final beating. You really can do no harm in this recipe until the liquids are added, because gluten (the batter-toughening protein complex) is only formed once water interacts with individual flour proteins. This goal is to incorporate the wet ingredients with minimal agitating of the dough. BUT KEEP IN MIND. We did Step 2. as an AWESOME safeguard against too much beating, so this is a precaution. Don’t sweat.

What Is Reverse Creaming?

Reverse creaming means you start by mixing your dry ingredients, then add the butter and beat it right in. This is opposed to traditional creaming of the butter and sugar, followed by gradual incorporation of flour and liquids. Why use reverse creaming? It’s about gluten. Gluten is a protein matrix formed by proteins after they are hydrated with water. The more gluten formed, the tougher and more rubbery the cake. Reverse creaming allows you to coat the flour with fat before any liquid is added, preventing long strands of gluten from forming and yielding an absolutely meltingly soft and tender crumb.

Many reverse-creaming recipes I’ve seen call for butter to be added to the flour until they form coarse crumbs. This is not reverse creaming, this is just adding butter. You can’t cream crumbs. True creaming incorporates air.

Other recipes I’ve seen involve adding some liquid along with the butter, just enough to make it creamable. Unfortunately, this kinda defeats the purpose, because with liquid and beating comes gluten.

MY solution is simple: temperature. Warmer butter will come together with the dry ingredients to form a dough. You just have to apply a hot-water-soaked dishtowel to the bottom of the mixer bowl to take the mixture from crumbs to a cohesive dough and then you can truly reverse cream it. 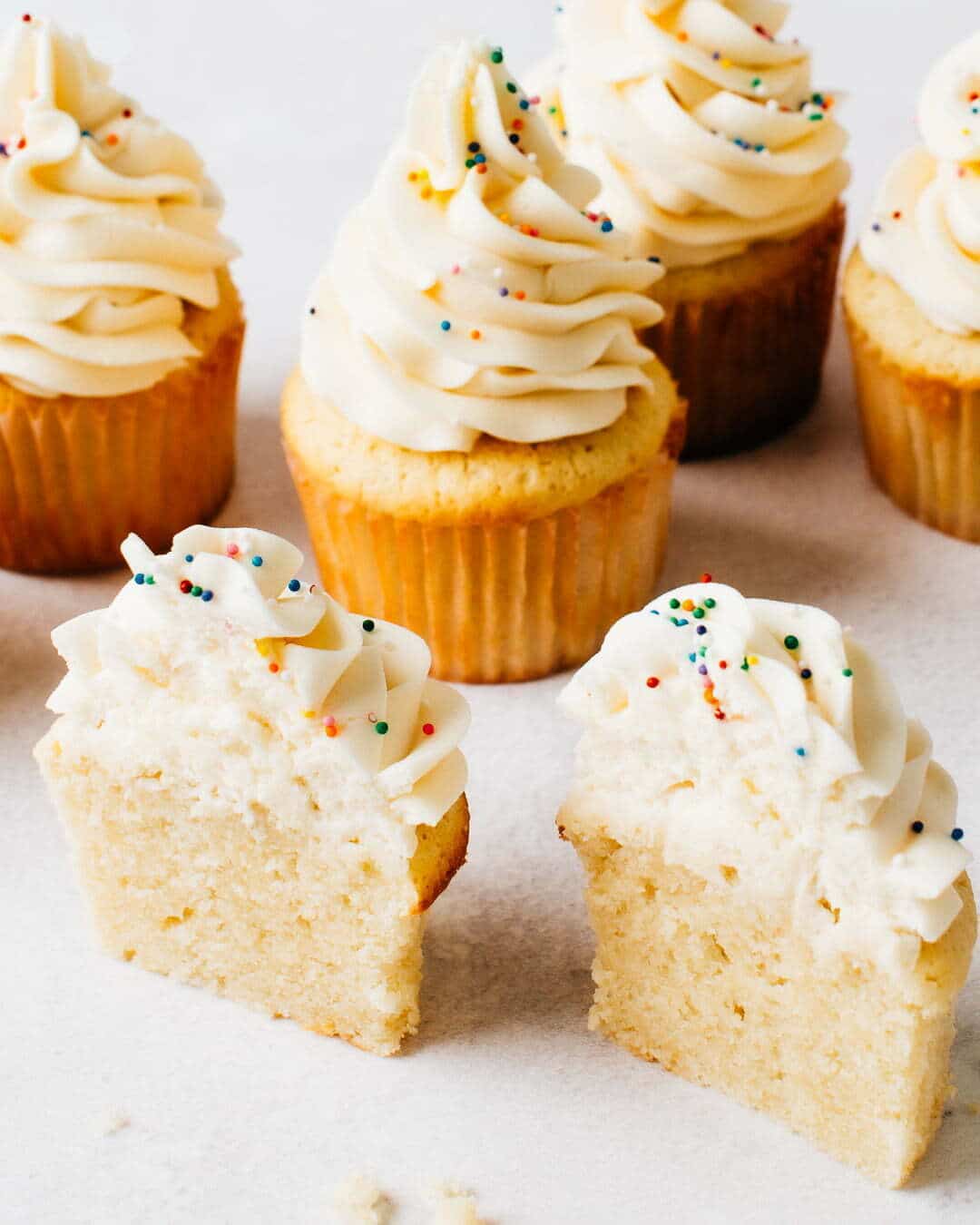 This recipe was tested measuring flour by weight and I strongly encourage you to weigh yours too for ultimate results (see details in blog post). In a pinch, you can make an adequate cake flour substitute by swapping in 2 tablespoons of cornstarch (no gluten and double the absorption capacity) per cup of flour (so you’d use 2 tbsp cornstarch plus 14 tbsp all-purpose flour to yield 16 tbsp or 1 cup – “cake flour”. In this recipe that would be 173 grams flour + 23 g cornstarch). They will likely collapse a little after baking and won’t have quite as velvety a crumb but will still be delicious and moist. It is strongly recommended you use a thermometer to check doneness because they are still pale when done and the texture when pressed remains quite soft and spongy (not as firm and springy as, say, muffins). Aim for 190ºF and start checking at 18 minutes.
Keyword Moist Vanilla Cupcakes
5 1 vote
Article Rating
Subscribe
Login
3 Comments
Oldest
Newest Most Voted
Inline Feedbacks
View all comments

I love a vanilla cupcake, can even eat it plain!

Me too! I’ve eaten SOOO MANY plain during the testing process 🙂

[…] The GAME-CHANGING Shortbread Method. Instead of beating the butter with sugar to cream and aerate as a typical first step in cake recipes, we start by incorporating the butter right into all of the dry ingredients. Blending the flour with butter coats much of it in fat, inhibiting gluten formation and creating the most velvety, melt-in-your-mouth crumb I’ve ever experienced. In this recipe, once we beat the butter into the flour mixture will sandy crumbs but we will not truly cream it in the sense that air is incorporated, which is why I consider it a “shortbread method” and not “reverse creaming” (as in my Fluffy, Moist Vanilla Cupcakes recipe). […] 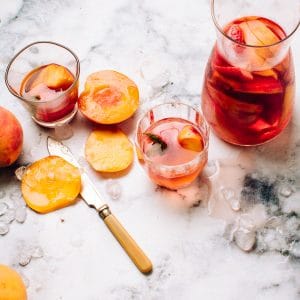 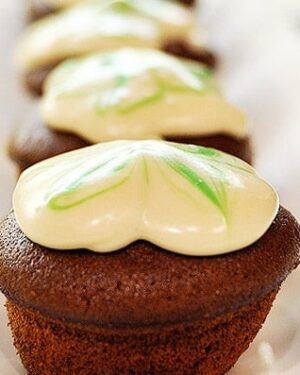 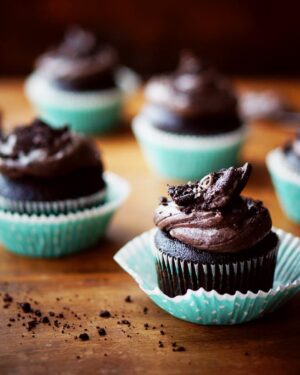 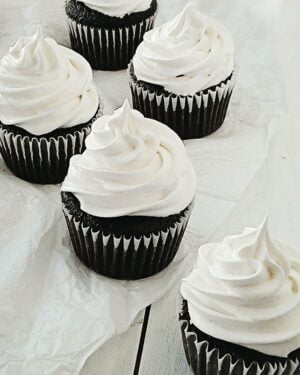