Author Jennifer Pallian BSc, RD
Hi old friends. My last post was in July. And here we are in July again. Ta da! Can we just fast-forward the in-between and pretend it didn’t happen? No?

Okay, here’s the scoop. I was an intern. In a hospital. Me no likey. I’m a fainter. ‘Nuff said. But it had to be done, and I learned a heckuvalot whilst working my rather distressed hiney off.

And really, all that matters now is that I made it out the other end alive (if slightly worse for the wear and a bit shell-shocked), and got a few pretty letters tacked onto my name in the process. Not to mention I have a very clear picture of what I don’t want to do with my life (which I think is a very important first step in making career decisions). Hoorah!

Now lets pick up where we left off, which was, I believe, celebrating life and summer and delicious food!

I thought a humble pie would be a very symbolic, tail-between-legs way for me to reappear on the blogosphere. Then I found out what humble pie was. Blech. You’ll be very happy I am making you Cinnamon Bun Biscuits instead, and I think you will be much more likely to forgive my absence having spared you the deer innards.

These delightful breakfast treats are based on an old family recipe. I think they are fairly common in the Maritimes, where I grew up. They are flakey and buttery and delicious. A simple glaze or cream cheese frosting take them to another world, but they are also perfect as is, unrolled like a scroll and dunked in coffee. The best part? They are quick and easy enough to be made on a Tuesday morning. And what a perfect way to bridge the time gap – they use the same biscuit recipe as those strawberry shortcakes, right where we left off.

2. Stir dry ingredients (except sugar and cinnamon) together in mixing bowl.

3. Cut butter into dry ingredients until mixture resembles coarse meal – you can do this with a pastry cutter, a food processor, blend in quickly with your fingers like I do.

4. Make a well in the flour mixture, then add milk all at once.

5. Stir with a fork until the dough is stiff and there are no more traces of dry flour. Cut through the center of the dough several times (about 25-30 stirs).

6. Turn out onto a lightly floured surface and knead gently (10-15 strokes).

7. Roll into a rectangle of about 1/2 inch thickness with a lightly floured rolling pin.

8. Spread softened butter evenly over surface. Mix together brown sugar and cinnamon and sprinkle evenly over butter. Roll up jelly-roll style, starting from the long edge. Slice the roll into 9 even pieces and arrange in ungreased square baking dish (9×9 inch). 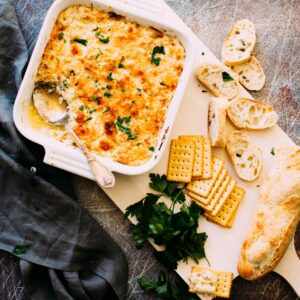 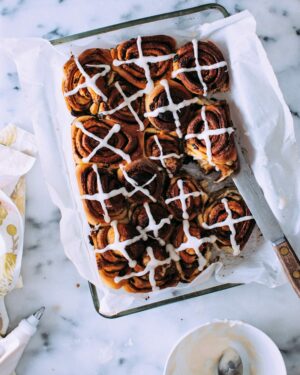 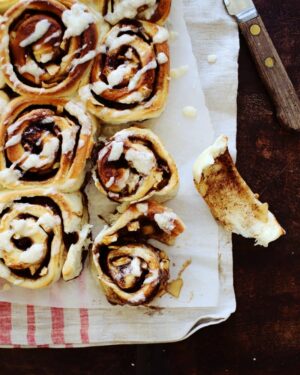 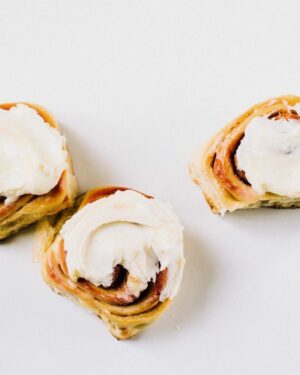