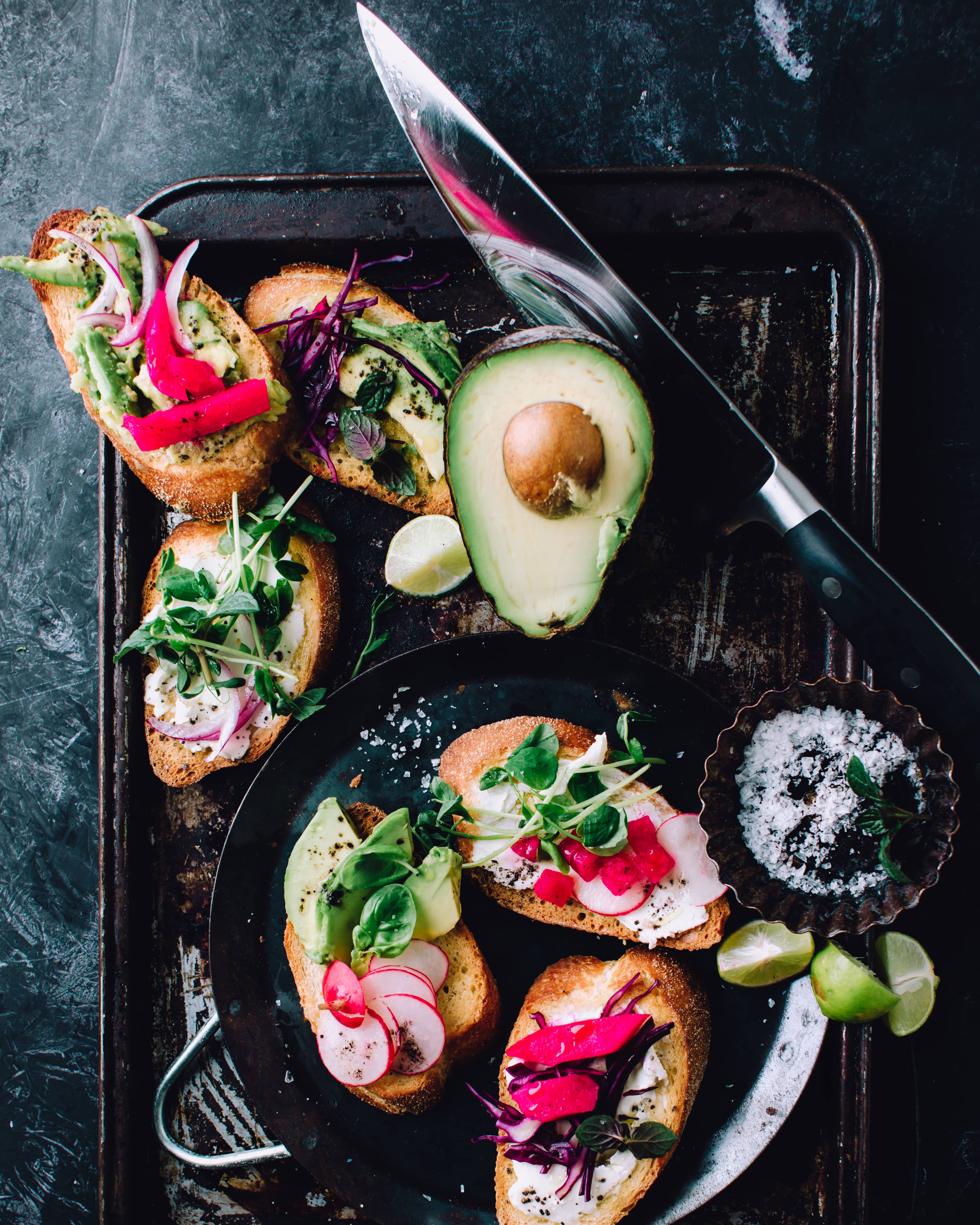 These rainbow crostini are a healthy, light appetizer with all the crunchy veggies and beautiful colours of the farmer’s market. A simple formula is all you need to freestyle the recipe.

In the summer especially, planned get-togethers and spontaneous play-dates can end up bridging a mealtime several times in a week. I like to some fresh, veggie-forward appetizers in my back pocket so that our plant consumption doesn’t plummet at the expense of being social.

This weekend when friends came over (hi Sabine!), I started by setting out a platter of fresh, local cherries (still sun-warmed from their trees) and English peas still in their pods (plus a bowl for discarding the shells). I’ve never seen kids devour veggies so quickly.

(That’s actually a good tip to get kids eating more veg – prep a bunch of carrot/cauliflower/broccoli/snap peas on the weekend and dish them out with some dip while you’re prepping dinner during the week – kids’ll gobble them up because they’re starving, but still have room for the meal.)

I use whatever I have on hand, and as long as this simple formula is followed, it’ll be delicious:

I start something creamy (avocado, cream cheese, ricotta or mascarpone are good choices) then pile on the veggie textures and colours. Shredded carrots, cucumber ribbons, thinly-sliced radishes, microgreens and herbs are all perfect. Chives or thinly sliced red onion are particularly good because they add a savoury baseline. Then, I layer on something tart, like capers, a squeeze of lemon, or the bright-pink pickled turnip pictured. A hearty smattering of flaky sea salt brings them to life.

My Indian husband grew up in Dubai and turned me on to so many delicious Arabic foods. They pickle all kinds of veggies. The turnips are the ones you get on Shawarma at restaurants, although you might not have known what they were. Turnips, of course, are white – but a wedge of beet is tucked into the jar as they’re pickling, turning everything that gorgeous hue. They’re super easy to make (I’ve done it several times using this recipe but with plain white vinegar), or else I buy these ones in the Middle Eastern section of Superstore in Canada – pick up a jar if you come across them, I’ve gotten so many people hooked!

If you want to go one step further in the lightness of the crostini, you could use cucumber sliced on the diagonal as the canvas instead of baguette. Just make sure whatever you’re spreading is super soft, for easy assembly on a slippery cuke. Now your appy is basically salad!