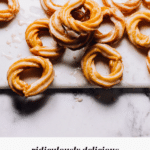 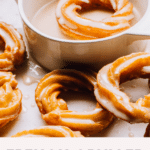 This tested-till-perfect french cruller donut recipe is so good. The interior of the crullers is perfectly fluffy and the exterior, shatteringly crisp. These are such a fun weekend baking project or a special treat for any occasion. 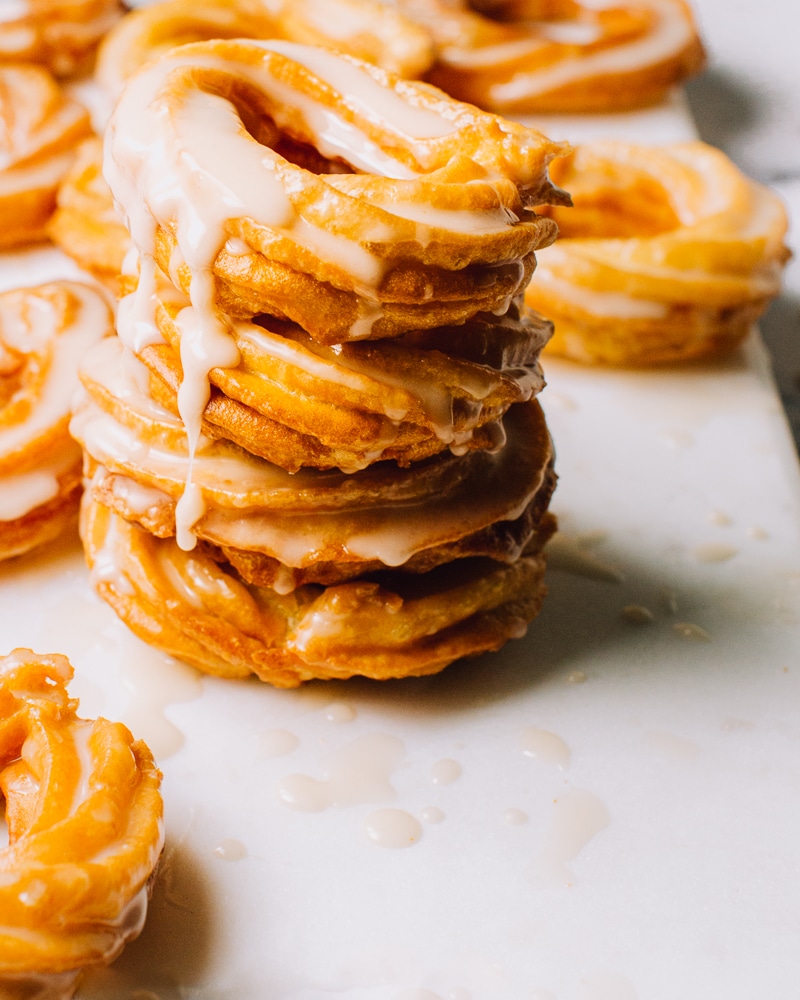 What are French Crullers?

French Crullers are a special kind of doughnut different from the yeast and cake doughnuts more commonly found. They are made with a special dough called choux – the same type of dough used to make éclairs, cream puffs and gougères. (All of which I want in front of me right now, please.)

Choux dough is made in a unique way.  Water and butter are brought to a boil, then the flour is dumped in. It starts to gelatinize immediately in the hot water and in less than a minute, a smooth dough is formed.

Whole eggs are the only leavener, and they are beaten in gradually once the dough has cooled a smidge. 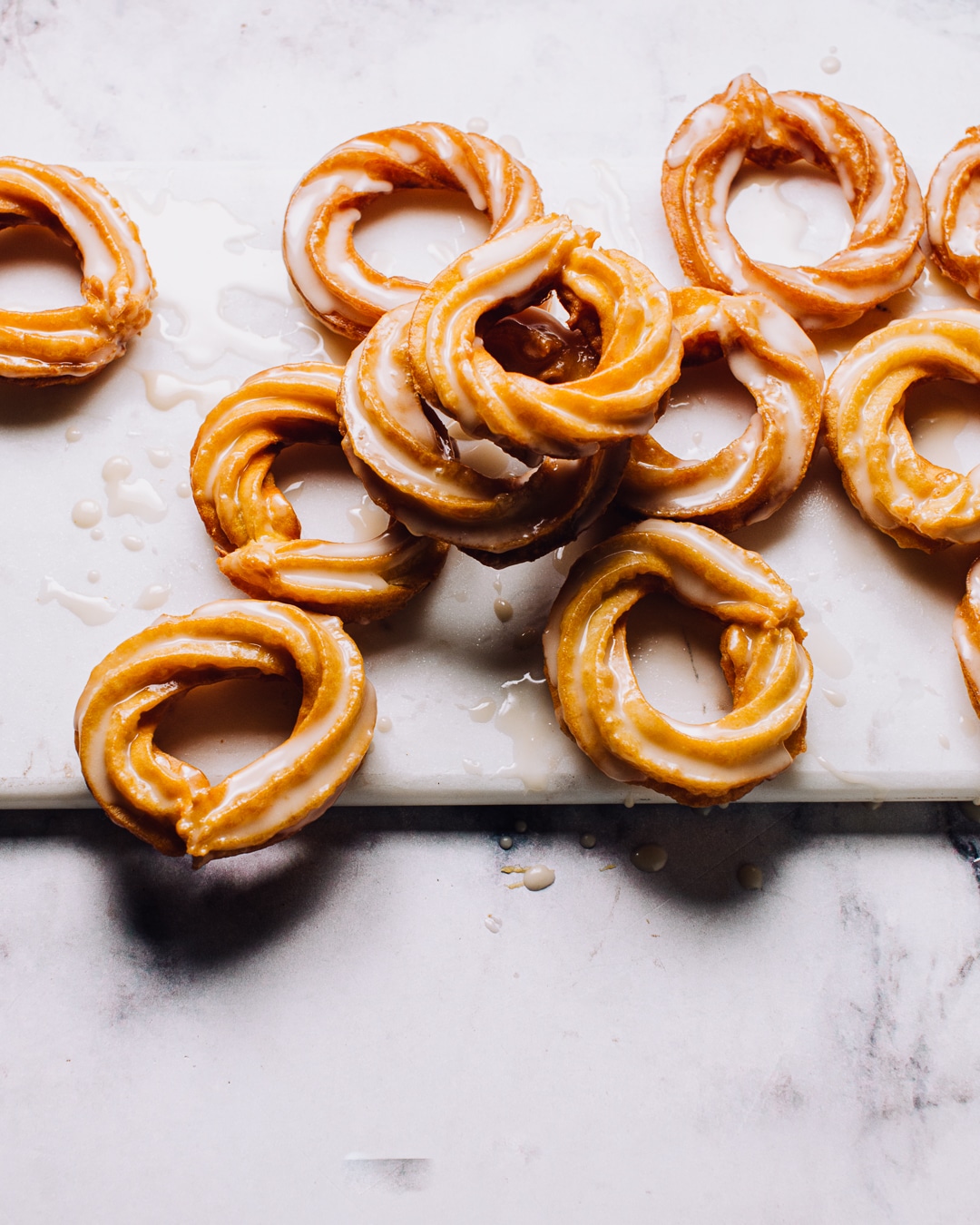 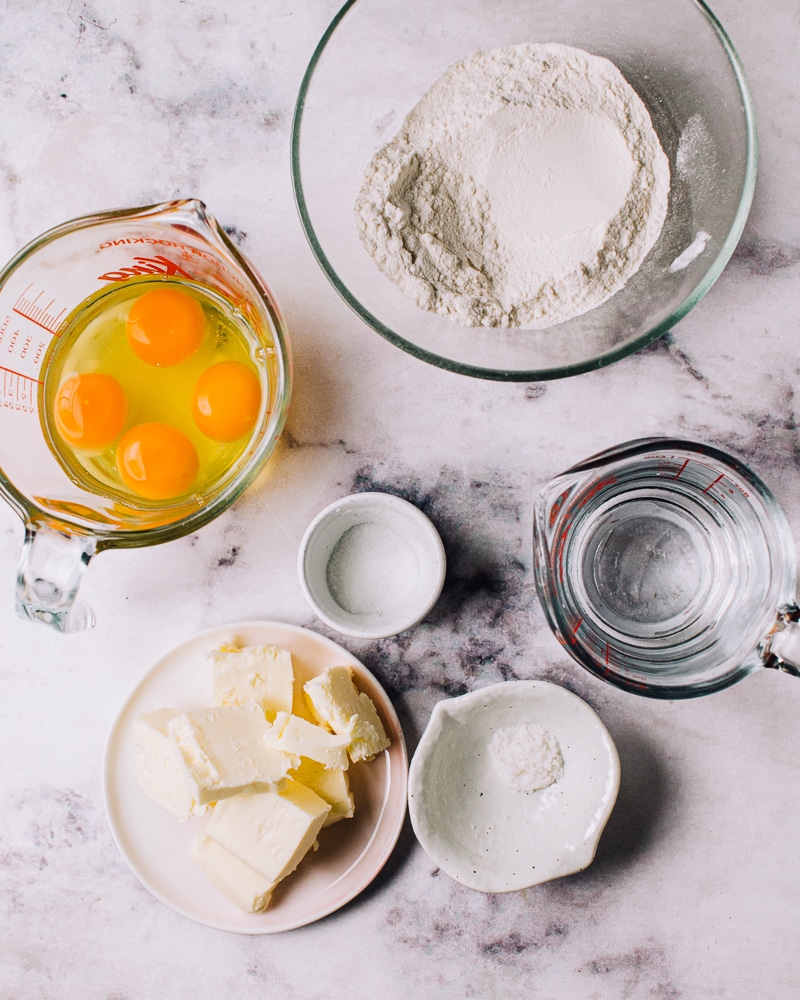 Any choux dough is actually cooked twice. First the flour paste is cooked in a pot, then it is formed into shapes, after which it is cooked a second time by a high heat method (baking, for eclairs and friends, or frying for French Crullers).

Because it is a high-moisture dough cooked quickly in high heat, the surface sets quickly while the interior is still very wet. As the liquid inside heats up, steam is formed but it is totally trapped by the now-deliciously-crisp surface.

Since the air bubbles can’t escape, they come together to form a single massive air bubble (or a few large ones). That’s the hole inside a cream puff!

The result for a French Cruller is a browned exterior with crisp nooks and crannies that give way to a moist, fluffy interior, made distinct by the large holes and not-too-sweet custardy flavour.

How To Make French Crullers

1. Place water and butter in a saucepan with sugar and salt and bring to a boil. 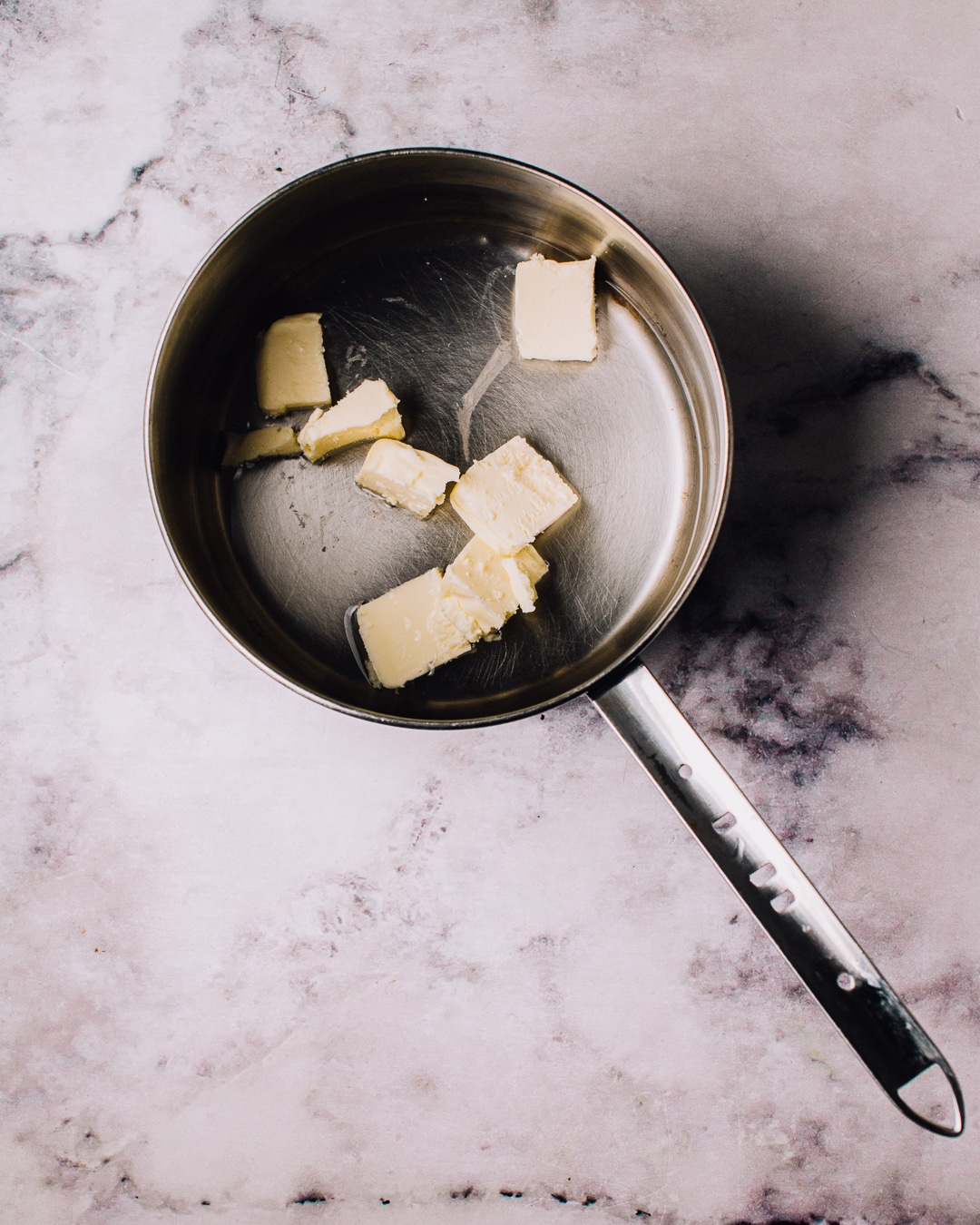 2. Remove from heat and dump in the flour. Stir and return to heat. 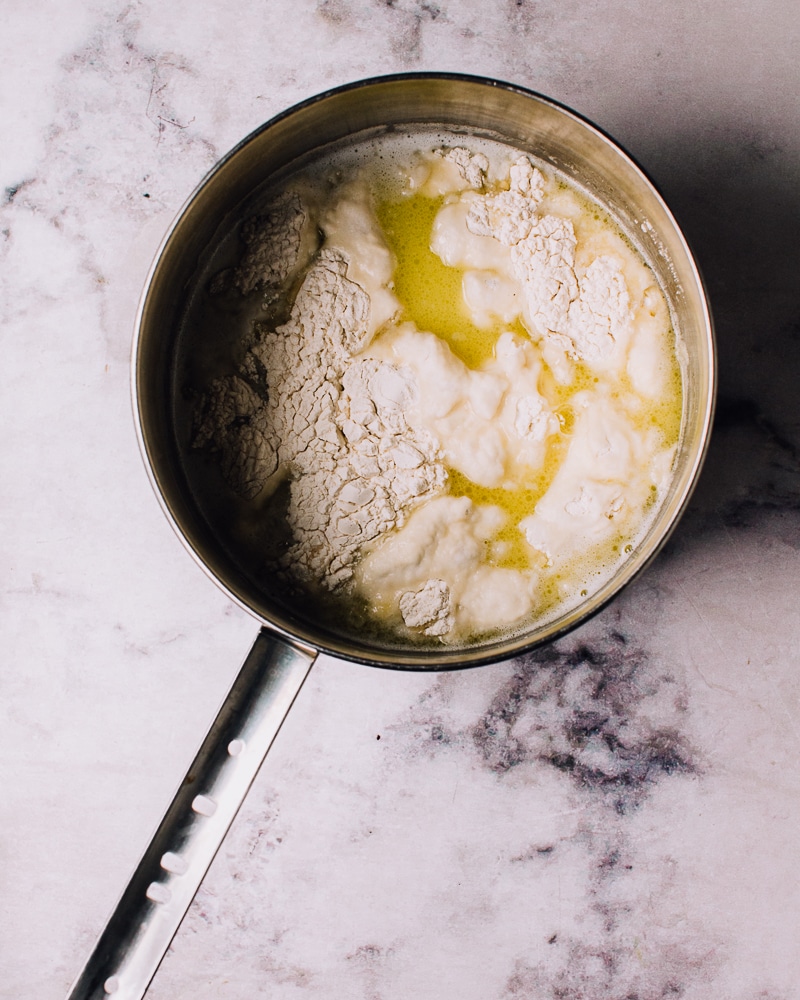 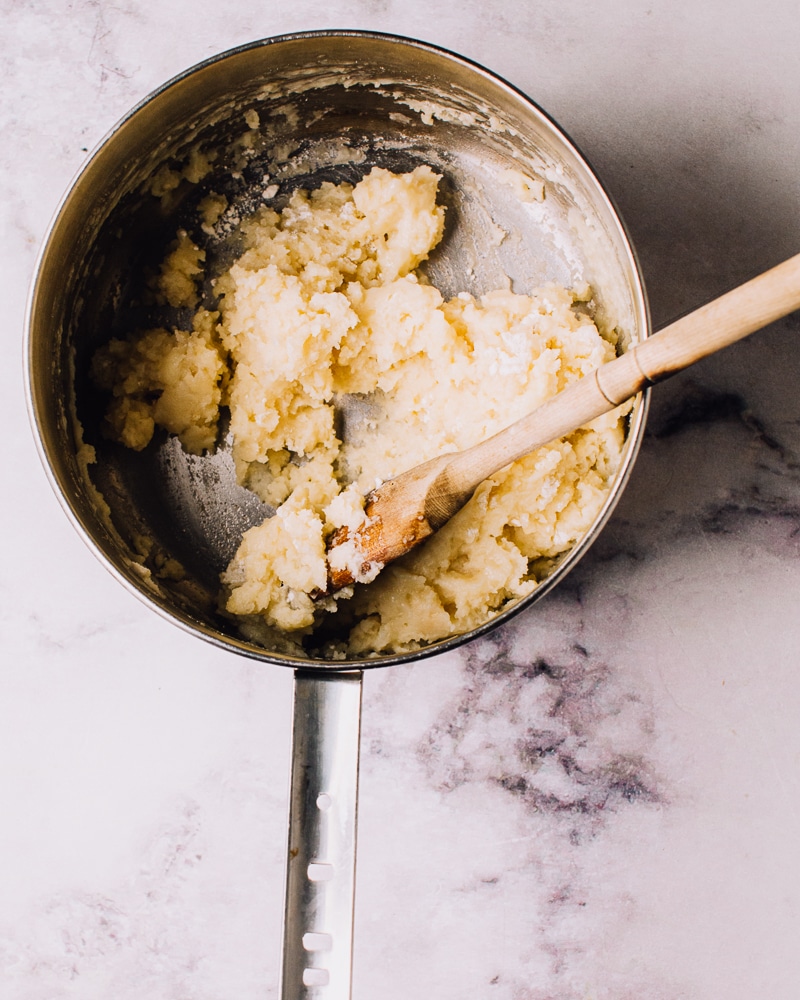 3. Stir constantly over medium heat for about 1 minute, until dough comes together in a smooth ball and leaves a coating on the bottom of the saucepan. 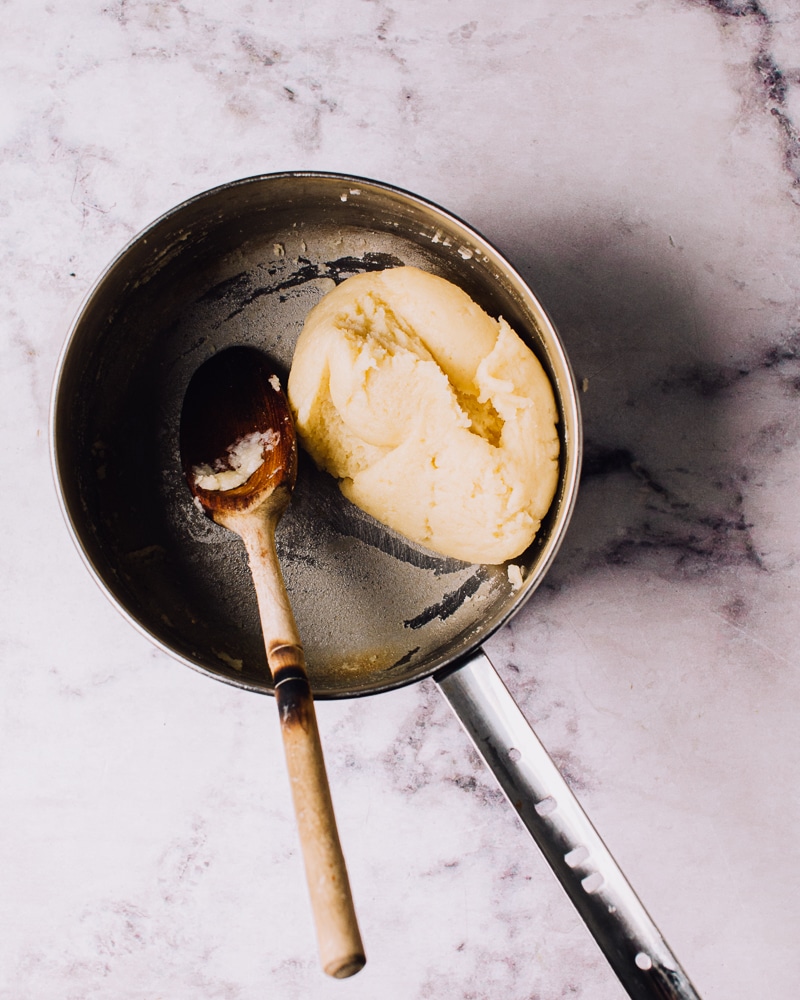 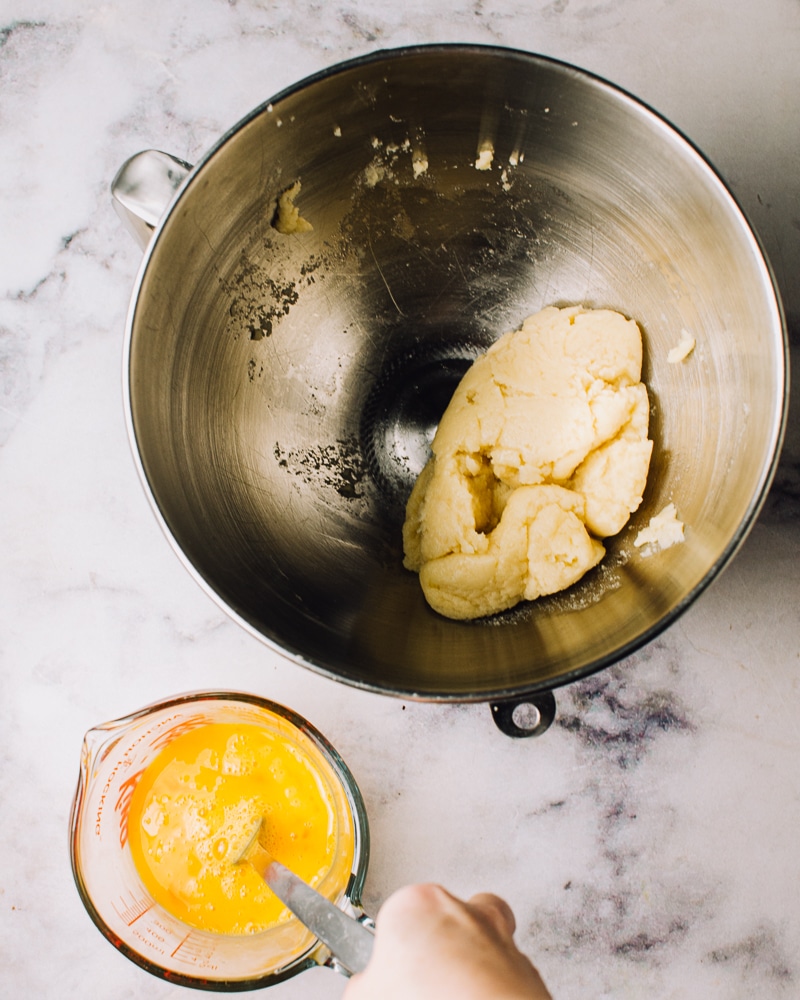 5. Beat eggs and incorporate into dough a splash at a time with mixer on medium speed. 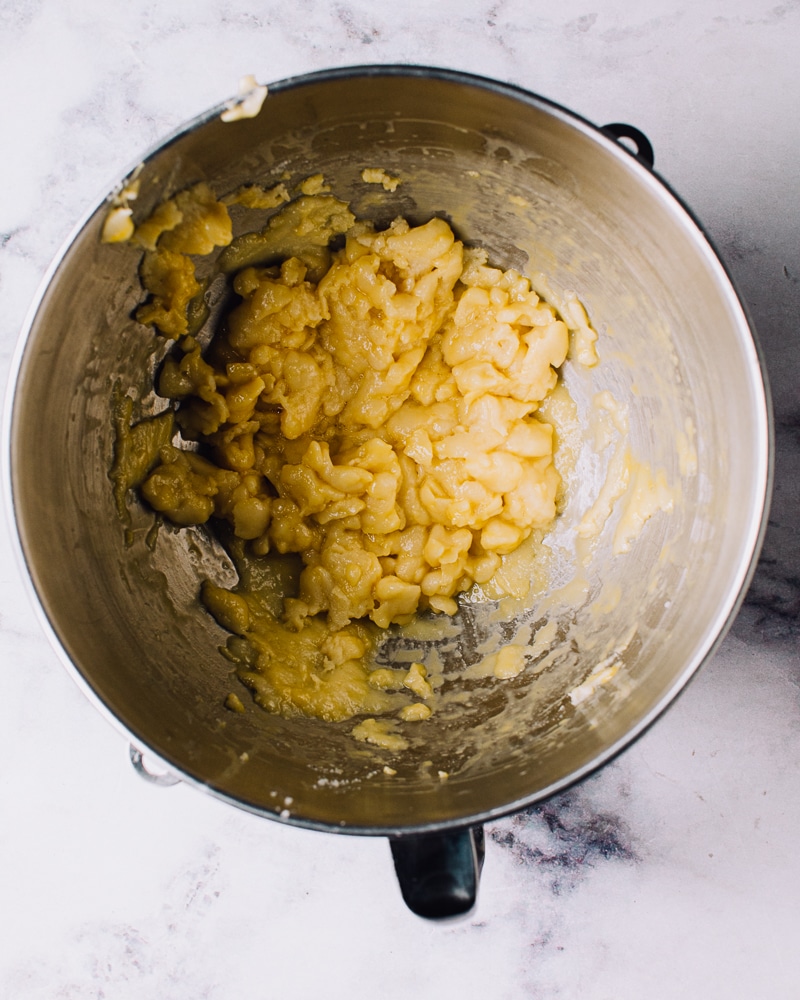 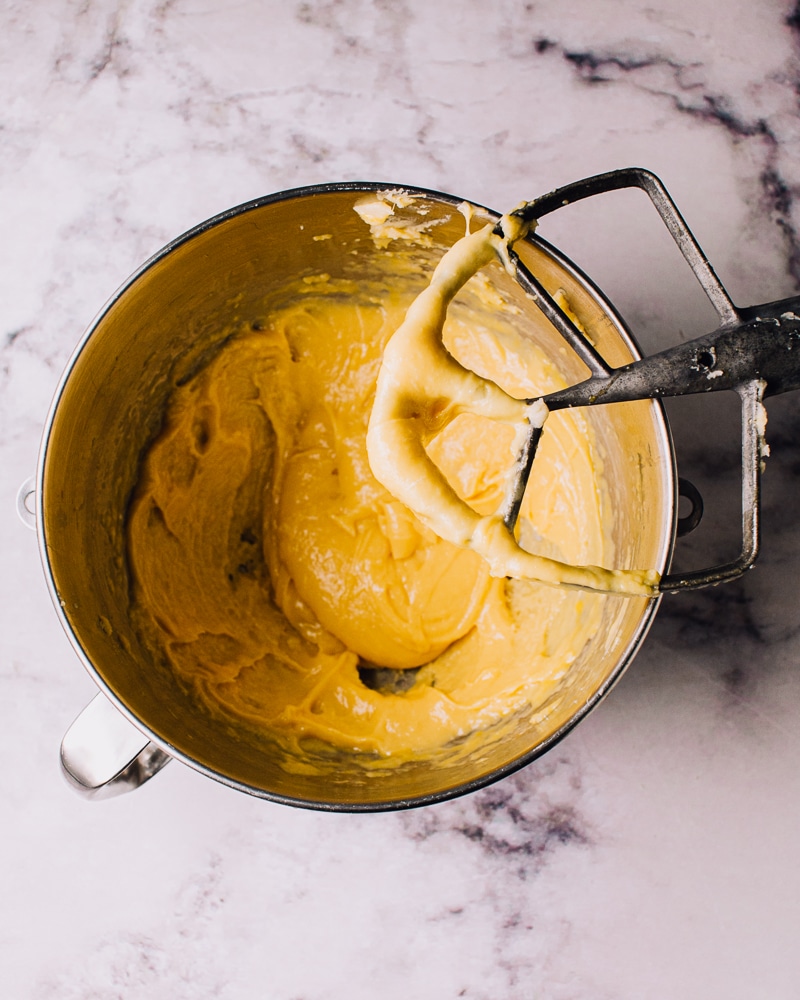 6. Transfer batter to a pastry bag fitted with a large star tip. Pop the bag in the fridge to cool for 15 minutes. 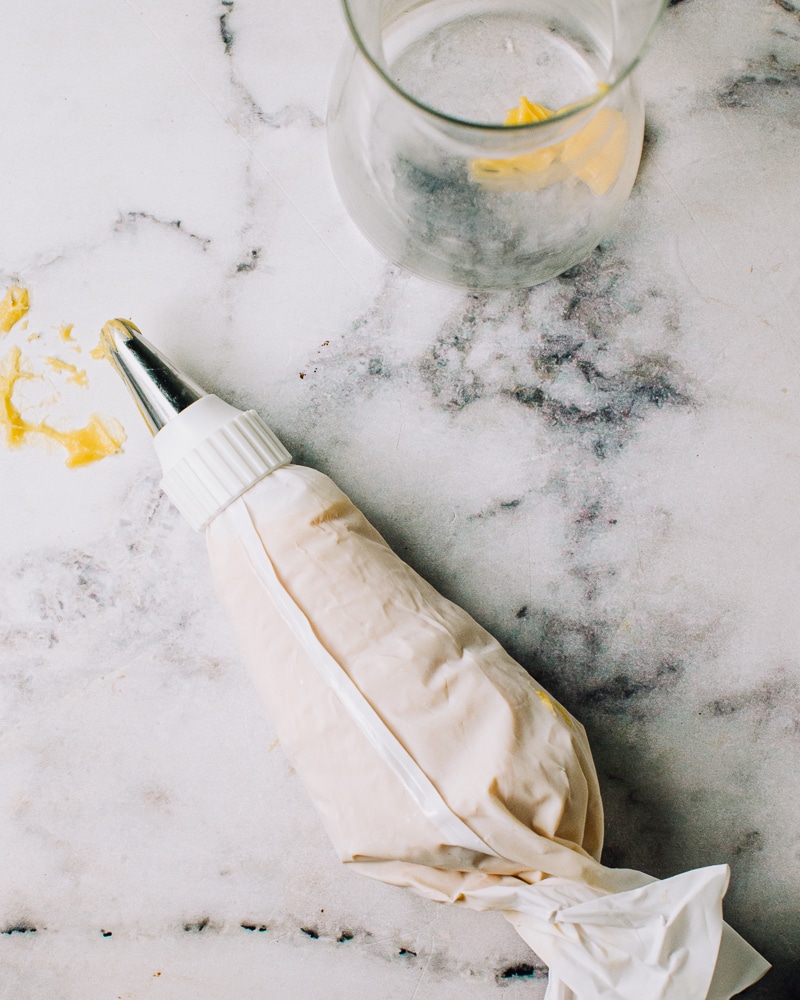 8. Pipe chilled dough in 3 1/2″ rings on the parchment paper squares. 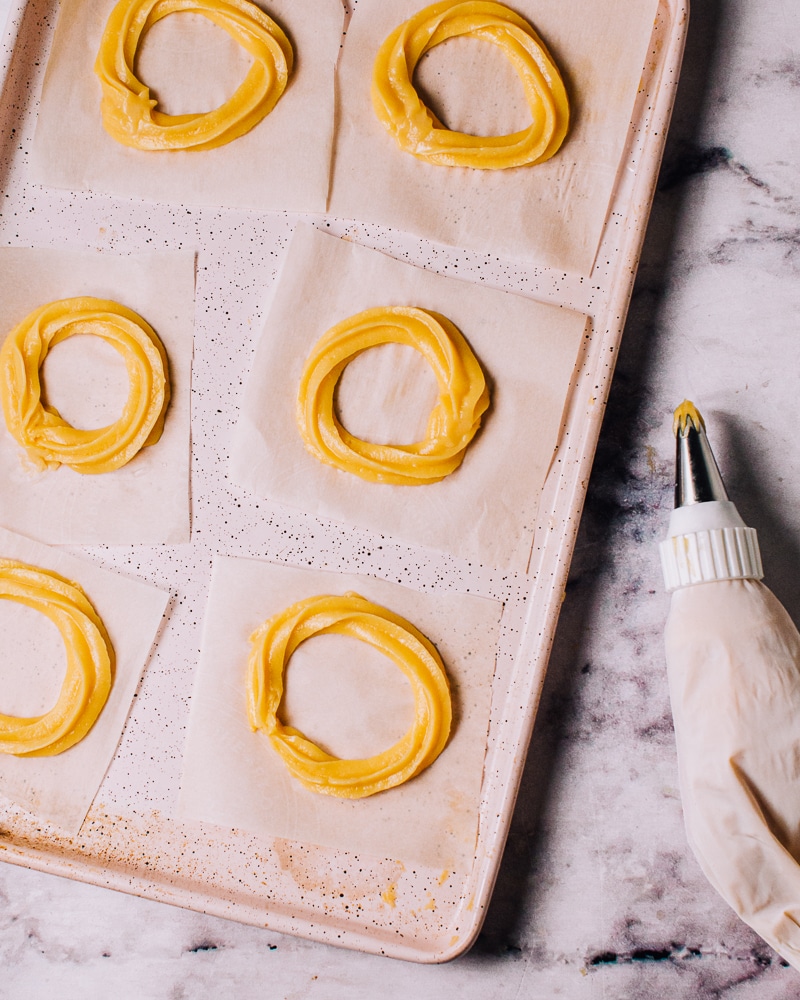 9. Use tongs to carefully place crullers parchment-side up in the hot oil. Pull off the parchment paper using the tongs and set aside (you can reuse it with the next batch). Fry about 4 crullers at time but don’t overcrowd the pan. 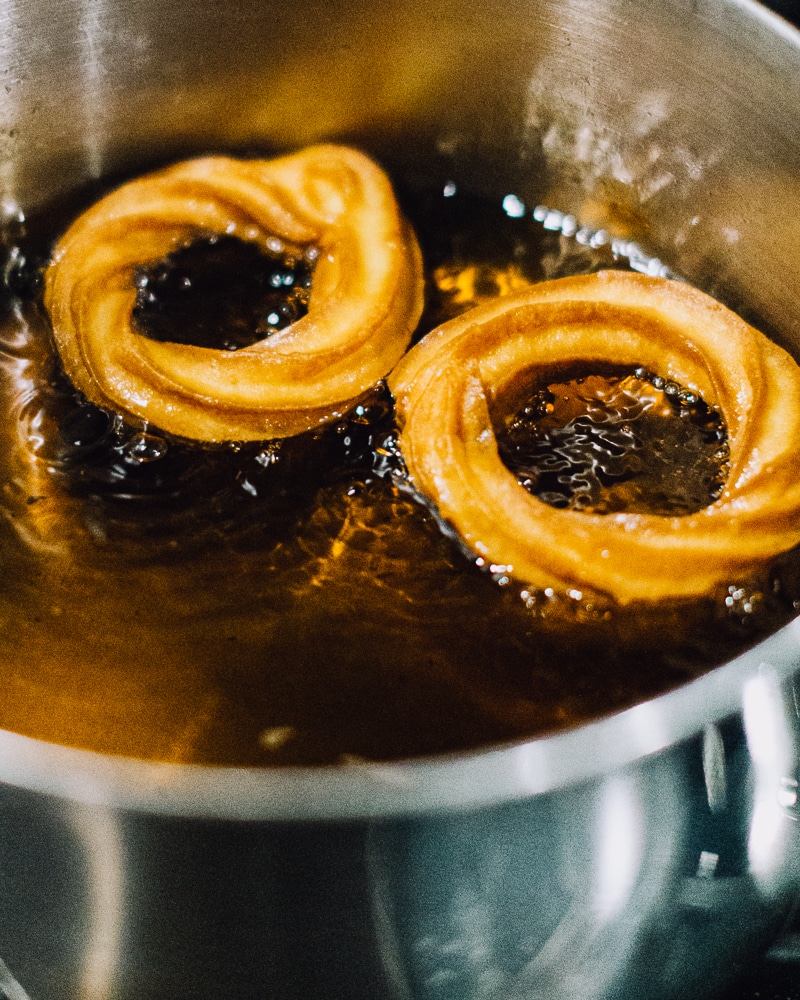 10. Cook for 3 minutes undisturbed on first side then carefully flip the cruller using tongs and cook 2-3 minutes on second side.

11. Transfer to wire racks to cool before glazing. 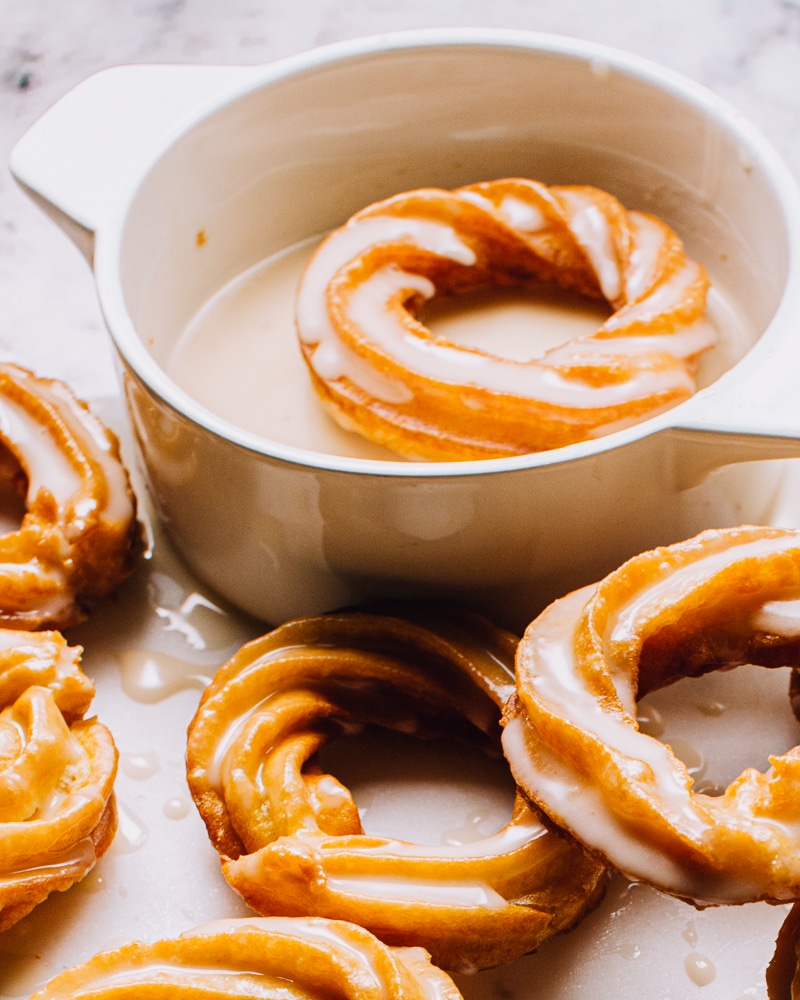 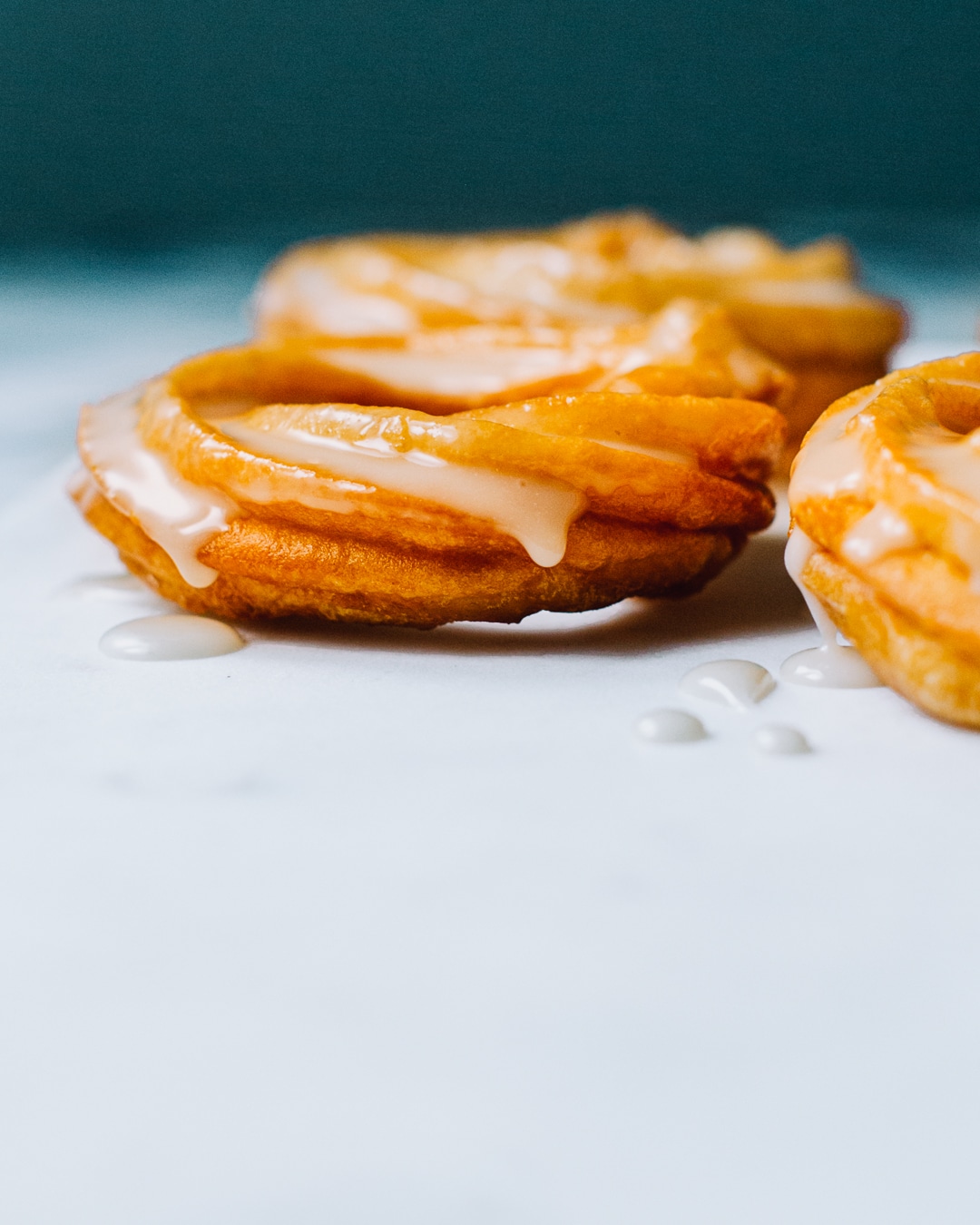 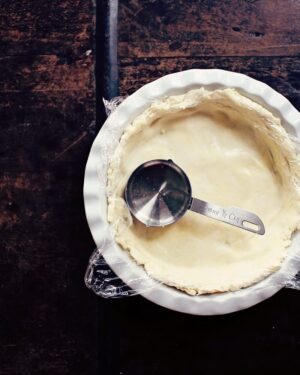 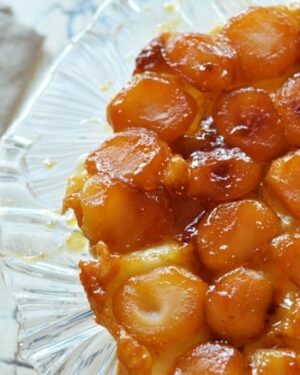 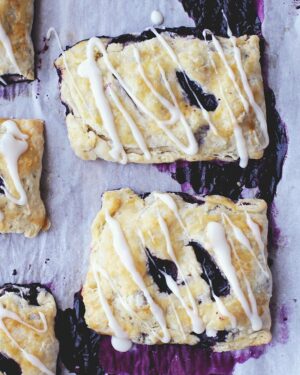