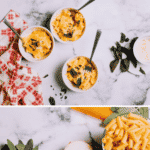 My kids loooove macaroni and cheese. This has the same coziness and creaminess (and even the same colour), but is packed with veggie puree.

I don’t hide vegetables for my kids, I want them to know they are there. So this isn’t trickery. But Theo remained firmly convinced that he was eating mac & cheese as he wolfed down the rigatoni drenched in creamy pumpkin sauce.

He was really happy to know that it was made with the pumpkin he selected from the farm. When we bought it, it was supposed to be just a pretty decoration, but the farmer commented that it’s a good eating variety, so we had to roast it to find out.

I can attest to its edibility. It has become two pumpkin pies, a pumpkin roulade cake, and this pasta dish so far and I still have several 2-cup vacuum-sealed portions of the puree frozen. Plus, I shared several packages with my neighbour. Who knew it’s so economical and delicious to roast your own?! I paid $7 for that gourd and got about 18 cups.

If you’re around here much, you likely know that I’ve partnered with Horizon to celebrate the quirkiness in kids and realness in what we feed them – and the fun in both. And seriously, how weird and fun is the powdery-blue pumpkin we just ate? I made this recipe with Horizon Organic Milk. #AllForWeird, just not in food.

As much as the kids were the focus for this meal, I added a few grown-up flourishes as optional toppings that made it totally dinner-party worthy.

Crispy sage is just crazy delicious, and takes only a minute.  A bit of hot oil and fresh sage go from soft and earthy to crisp and toasty-fragrant. Sprinkle the leaves with a bit of salt as soon as they’re out of the oil, and you’ll want to eat nothing but crispy sage for dinner.

A few shreds of parmesan and a sprinkling of red chili flakes to balance the pumpkin’s natural sweetness and you’ve got a winner. Crumbles of pancetta or bacon would be crazy good too.