I took Oliver to the groomer this weekend for a 7 am appointment on a Saturday morning.

He has never been groomed, EVER. In his four years of life. So why I felt immediate attention to his hairdo was so urgent that 7 am seemed reasonable…

The grooming lady was very pleasant. She calls herself “Auntie Sue”. She tried unsuccessfully to win his affection by feeding him those weird cracker sticks dipped in a substance that mimicks cheese.

You know, the rectangle plastic snack thingy with two compartments, one for sticks, one for cheese goop? You peel back the plastic and dip the sticks in the goop? Ick.

She said that it would take an hour if things go well. Two if he struggles. We were going on three when I started to sweat just a little.

My friend suggested maybe they were just making him “extra handsome”.

I had my money on him coming out looking exactly as scruffy as he went in, but with crazy, bulging eyes and blood on his nails from his ravaging of Auntie Sue.

3 1/2 hours later, they called and said he was ready! And it had gone…. smoothly? Huh? Were they talking about MY dog?

Frankly, I think they lied. But regardless, they smoothed out his wildly under-disciplined coat, and even removed every last dreadlock from his furry butt.

Like Oliver, this cake is a bit rumpled, but completely loveable.

I am obsessed with wild blueberries. Hence the extra suitcase and yada yada yada.

I wanted to bake them into something special – you know, something slightly more dressed up than pancakes or muffins – while still letting the blueberries the show.

While we are on the topic of obsessions, I am also obsessed with buttermilk. It makes for the moistest crumb in any cake, waffle or muffin you’ll ever meet.

Contrary to what the name would have you believe, it is actually low fat. In yesteryear it was a by-product of butter making (the liquid that was left once the cream was churned). Now it is made commercially using bacterial cultures, similarly to the making of yogurt.

It is thick and tangy and perfect. I use it in savoury applications as well, to add richness and acidity to soups, sauces, and my favourite – homemade macaroni and cheese.

This basic buttermilk cake recipe is one of my all time favourites, one that I tinker with often. It was previously incarnated here as Chai Spiced Apple Cake. It is light-textured, moist, and richly buttery.

Do follow the instructions, with regards to the creaming and the addition of dry and wet ingredients alternatively. This ensures enough air is incorporated to give rise to the incredible fluffy end result you so desire.

Careful with the blueberries – folding in is key, so you don’t squish out all the air bubbles you so lovingly created.

Allow the cake to cool completely before you attempt to flip and release it. If you don’t, you will have a mess on your hands. A delicious mess. But a mess, nonetheless.

Serve with a pillow of softly whipped cream.

Preheat oven to 325 degrees Fahrenheit. Spray a nonstick bundt pan with cooking spray and set aside.

In the large bowl of a standing mixer, beat butter and sugar until light and fluffy. Beat in eggs, one at a time, then vanilla.

In a separate bowl, whisk together flour, baking soda, salt, and spices. Add half of dry ingredients to butter mixture and beat on low speed till just combined. Add half of the buttermilk and beat again. Repeat with remaining flour mixture and buttermilk. Gently stir in blueberries and transfer batter to prepared bundt pan. 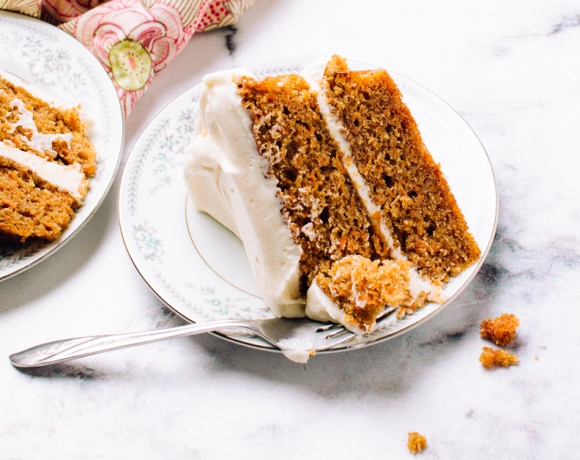 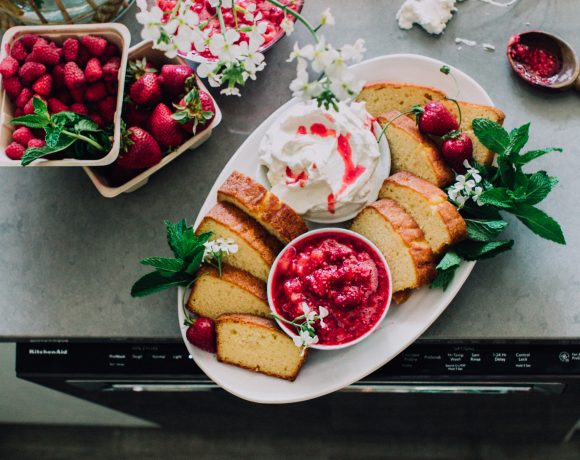 Delicious buttermilk pound cake topped with fresh strawberry sauce and mint-infused whipped cream (you could swap the fresh mint for basil or lavender from your garden!) and sweet memories of childhood berry harvest. 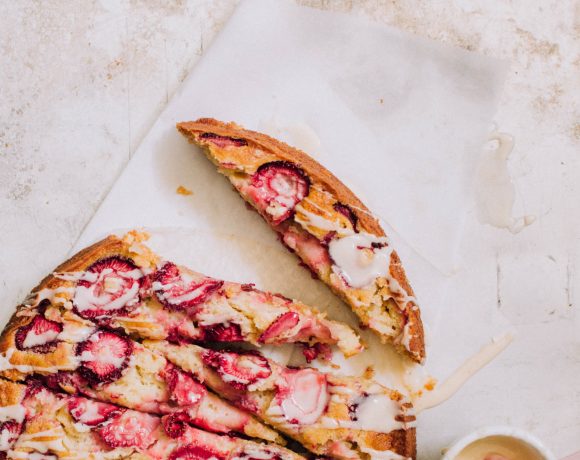 I have a Strawberry Buttermilk Cake recipe to share with you. It’s moist and vanilla-scented, studded with jammy strawberries and lashed with icing. Would you like a slice? Also, sharing a tour of my new backyard, the outdoor space of my dreams.