How to Make Greens Taste Grand

I was literally this close to having a Cadbury Creme Egg for supper. It’s Easter, after all, which I think is a perfectly legitimate reason to do such a thing. There is something about that tooth-achingly sweet fondant filling that drips down your chin and stickifies your fingers (and keyboard, as it turns out) that I find positively irresistible.

But, I reasoned with myself – it is exam period, and I will probably have a perfectly legitimate excuse not to cook on any given day over the next two weeks. And I have a crisper drawer in my fridge groaning under the weight of luscious, fresh vegetation. So, I reluctantly re-stuck the partially unwrapped foil on my delectable creme filled chocolate treat, and whipped out my apron along with some leafy greens. And I decided I should tell you about how to make greens taste grand. Yes, grand. Not just edible, but delicious.
I really love any edible leaf, but I didn’t always. Nothing is worse than a plate full of soggy, bitter, marsh-hued greens. The first time I had kale that I liked, it was a revelation. This was me: Whaaaaaaaaa….?! That can taste like this?? And now I fill my basket (and meals) with some variation of arugula, spinach, kale, chard, curly endive, beet greens, gai lan, rapini, etc. every week.
Let me divulge a few vegetab-ular tricks:

For dinner tonight, I started with sauteed shallots and garlic, added kale and curly endive, and flavoured them with crushed chili, soy sauce, rice vinegar, honey, sesame oil, green onions and toasted sesame seeds.
The pan I used to cook the greens doubled as a panini press for some delicious grilled sandwiches! Dessert, of course, was a Cadbury Creme Egg. Oliver’s dessert was the wrapper… oops. 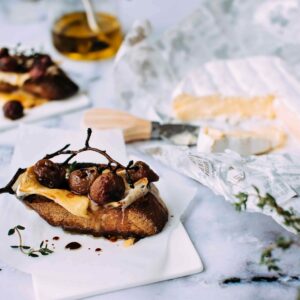