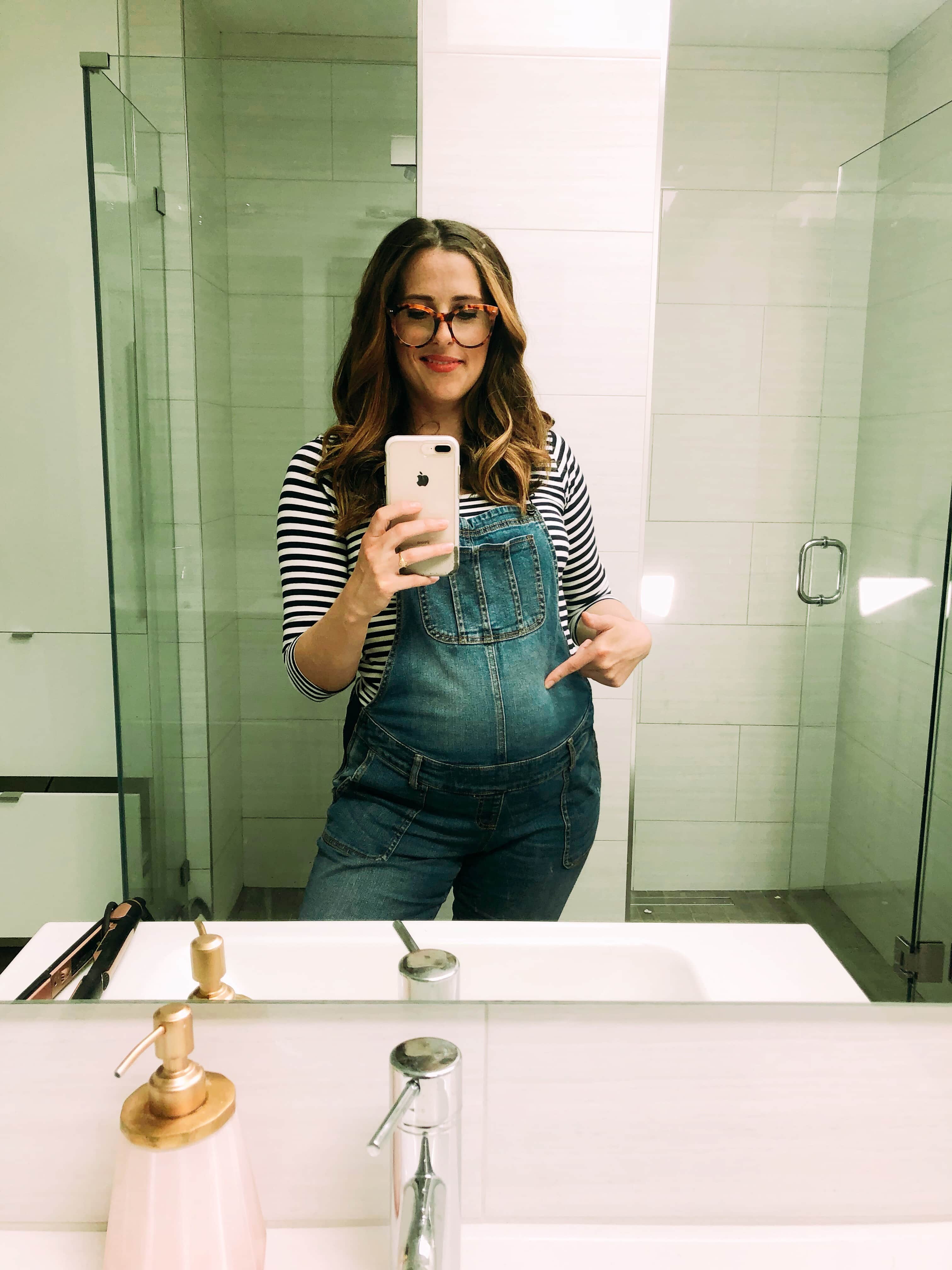 I’ve been a bit quieter than usual on the personal front with blog posts this year. I’ve been sitting on a secret.

Except it’s not a secret if you follow me on Instagram stories where I’ve been griping for the past four months.

(I’m sorry if you do follow me there and clicked this link expecting a new, exciting surprise and are thinking pfft, I’ve been hearing you whine about the smell of laundry soap since January, this is not news.)

I don’t know why it’s taken me so long to write about it here. Maybe because it seems surreal. Maybe because I’m so humbled by the fact that I’m becoming a mom again for the third time that I don’t even know what to say. Maybe because I haven’t had much to say except I feel pukey and tired and I’m getting huge real fast and I would like to eat some potatoes.

With my other two babies, I had a lot to talk about. I had a lot of nerves to work through. But with this pregnancy, I feel uniquely calm and at ease. (I’m assuming with totally rational optimism that this is a predictor of a super chill baby.)

Also, I’m trying to keep personal content and food/recipe content a bit separate, as I’ve mentioned before. (It’s weird that I wrote about a miscarriage on a Pumpkin Roll Cake post and that a stranger who googles the recipe would have to scroll through that just to get to the mousse-y, light-as-air cream cheese filling, don’t you think?)

That does make it harder to get the personal stories out there, though, because it means starting fresh with a new article and presumably having pictures that aren’t food which necessitates finding one of myself or my children wherein we are groomed and in reasonably tidy surroundings.  But now that I am out of first trimester nauseous fog I should be able to manage a bit better.

So here’s all of my baby news in a nutshell:

-Due September 18, I’m 20 weeks along, and have my anatomy ultrasound next week.

-I had the NIPT test at 10 weeks and all is healthy and positive so far. That’s also how I found out the gender early.

– Theo and Everett are excited, although cautiously at times. There’ll be a 6-year age gap for Theo and a 4-year one for Everett. We’ve been a tribe of four for a while, I’m sure it’ll be a big adjustment.

-I was extremely nauseous for the first 16 weeks, in bed most nights at 7 pm, and napping most afternoons. WAY more sick (starting earlier and then more intensely) than with the other kids which made OTHER people think it was a girl and made ME think it was twins. (The latter theory won’t be dispelled for me until after the scan this week. If there is still only one in there,  I will accept the intense symptoms as nature’s way of telling me to stop procreating now.)

– Adarsh and I can not for the life of us come up with a name we agree on. He likes names of planets. And celebrities. He actually suggested Prince. Also Mos. Like, the rapper Mos Def.  SEND HELP. And potatoes. I mean, since you’re sending stuff.

That’s all. Imma be over here in my overalls eating salt and vinegar chips in bed, getting crumbs all over my belly, and re-re-re-watching Friends.

Oh gosh, Jennifer! I remember when I was pregnant with my third child. I already had two boys, and was so certain that the third one was another, “dirty little boy, ” as a friend said. That was in 1985 when they did not routinely do ultrasound, etc, so I did not know it was a GIRL until she popped out. She is the jalapeno of the family, the chili pepper. People rudely asked me if that baby was an “accident” while I was pregnant. NO, she was not! During that pregnancy I found a tag on my teabag that said, “A baby is God’s sign that the world should go on.” Those words are even more comforting now in these trying times we are enduring here in the US and all over the world. Congratulations!

That’s so sweet, Caterina, I love the teabag message. And what a sweet surprise to find out the gender at birth. People do say the rudest things. Yesterday a woman asked me if I know what I’m having, and when I said another boy, she said, “well, I guess you’ll have to try again”. WHY would she assume I don’t adore having sweet little boys??!

Adele V
Reply to  Caterina B

Caterina – sorry i’m just reading this now but I love your statement “…more comforting now in these trying times we are enduring here in the US and all over the world.” We must stick together. Congratulations to Jennifer on number 3. In my family we call the third child the perfect pancake! The first pancake might get a little over cooked, the second one is getting there but the third one is perfect on both sides and in the middle. 🙂 Blessings!

Congratulations!!!!! My prayers to out to you & your family for this blessed event. <3

Thank you so much Cheryl!